Back to all posts

SMF Live: What direction do you feel music is headed, and where do you fit in?

Danny Lester: I feel that music is headed in a disastrous direction, and we are a reason for it to be headed in the right direction.

Tony Italiano: I don’t think the direction is awful, we’re not paying attention to the right things. The focus of the industry, especially for rock music, is a little diverted in everything. Radio seems to be getting worse and worse, which is no shock to anyone, we just have to do our part to fix that [by] writing very honestly and with high energy.

DL: I hope that once people get to see who we really are, what we do, and what we represent that it will inspire a lot of artist’s and a lot of musicians to come out and follow in the footsteps of creating music like we do. It’s something that is meaningful and passionate.

TI: It kills the weaker ones along the way.

DL: Yeah, we just want to put it back on the map where creating deep, meaningful, music is more of a part of life. Like back in the 90’s music used to inspire people, and now people are just creating music just to make a buck by writing one simple line down and singing it over and over. There’s more to that then just creating for the hell of it, you know?

SMF: A quote from Tony in our last interview-

TI: Should I apologize in advance?

SMF: It says “Here’s to our first and last show in Birmingham.” What brought you back?

TI: You did, first of all, but it’s the same way I feel about any venue or any promoter that doesn’t do their job…it leaves a bad taste in my mouth. And as a touring band that’s something you have to deal with all too often. When you show up to a place with no flyers, no radio promotion, and with the other bands we hope that they bring whatever fans that they have…and it’s just a combination of things. I’m glad we came back. We were at The Syndicate Lounge last night. Very, very, cool place.

SMF: What is the music scene like in New Orleans and what differences have you noticed from across the country?

KL: Yeah, there’s pretty much an EDM scene anywhere you go now. As far as traveling and going different places, going out west- it felt really nice going out west because there was a lot of really talented bands that we ended up playing with in the same genre as us, and that’s reassuring that there’s still people out there still trying to do something real and [trying to] get rock music out.

TI: It’s an age-old battle fighting against music that’s been kind of grandfathered into the city itself. And I’ve said this before, I don’t have any hatred or malice against brass music, jazz, funk, or any of that traditional stuff. But, being in a rock band in that situation, especially an original rock band, that can go one of two very different ways. [You] can stick out and get noticed because you are so different, or you can be completely unaccepted. I feel like one has slowly turned into the other because we have been doing very well in New Orleans this last year, its been killer, and getting people just to pay attention and to see what you’re all about seems to be an art itself on top of your music. 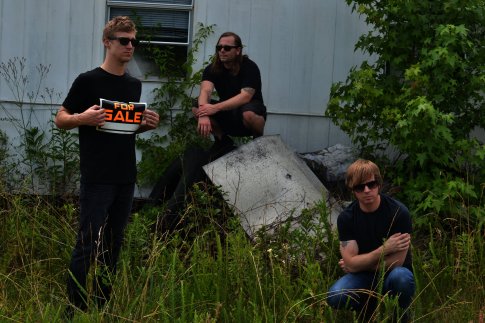 SMF: You’re getting ready to release you new album, right?

SMF: So what can we expect from it, and what are your plans for touring?

DL: I think we decided on releasing it in ********, and what you’re going to get with that album is a diversity of music, but at the same time it all fits in with each other. We’ve played multiple shows where the promoters or people that just put the shows together get asked “Where did you find these guys?” Every song sounds like something different with different influences in each song that we play on the album. As much of our live sound will be in this album, or as much as we could, because that’s when we’re most dominant, is when we perform. People that liked our EP and that enjoy seeing us live are not going to be disappointed at all because we’re making sure that everything is perfect before we release it.

KC: As far as touring after the release, we haven’t been up too far the East Coast or up North, yet, so that might be something that we have in mind to do. We might still go back out West, we really don’t know yet.

DL: We made a lot of really great friends out West that really appreciate what we do.

KC: When you hit city’s for the first time, you really don’t know what to expect. You don’t know who you’re going to meet, but everything was pretty successful as far as our West Coast tour went, and as far as meeting cool bands and people that just knew what was going on around the city. It’s going to be pretty legit once we plan to get back out there.

SMF: Have you considered adding on a fourth member to the band or do you want to stay a three piece?

DL: When we first started trying to get a grip and direction on our sound, we were thinking about adding a fourth member, but every time we tried-

TI: When you spend enough time in small confines together, you’re bound to see everyone’s real colors. I’ve always said that you never truly know someone until you live with them, same antithetic. But also, like I said, the rate at which we write good music seems to escalate the more we’re together and adding anyone else into that pot would kind of hinder us at this point. And, another thing is, it doesn’t seem necessary right now. I don’t know what we would truly gain by adding another person.

DL:  We have enough material to release two albums at this point, honestly, but when we get together and we jam and create, it’s just this chemistry. It’s just there, like he said, and if we did end up pulling anyone else in then it would hinder what we can do ourselves. I feel like we get done as much as we need to get done.

TI: I feel like we’d just know when we’d need to add somebody, we’re not just going out to go out and look for them, it would just happen.

SMF: Obviously, having a solid support system at home is important for any touring band, but I’ve found that it’s almost equally important for them to find that support, and to build connections, with people from other city’s. How has it been building those relationships, and what are some good and bad things that have come from them?

TI: In some ways, it’s been easy, and in some ways it hasn’t been easy at all. A lot of it depends on where we’re going, first of all, in some towns it’s like we haven’t done enough research to even try and play [there]. It may just not be the right time, or there may just not be a scene there, really, or none there will have that interest in music. But that’s what touring is all about, it’s this giant trial and error. It’s been a real eye-opener. There are some city’s I thought would be a lot better than others, and you’ll get big surprises. That’s what I’ve gained from this tour, what to do and what not to do.

SMF: I feel like you have to put a lot of trust into people.

DL: There’s a lot of factors that go into it, and trusting people in different city’s is a major part of that because you don’t know anything about that city, all you can go off of is what they say will help you in that city. Sometimes it bites you in the ass, sometimes it works out for you. Like Tony said, it’s all trial and error.

SMF: Where do you gather song inspiration, is there method to the madness, and have you struggled with getting what’s in your head on to paper?

KC: Some of the songs we have were written in five minutes. Musically, it came together with a whole structure. We record every practice that we have, so we’ll come up with something and be like “All right, cool!” They’re actually really good at remembering what they do in the middle of jams and stuff like that so we can just put it on the back burner. There might be something like a different part that ends up being all we needed to make another song.

DL: There’s been countless times where we’ve written songs and something else that we think will be a cool song that we put on the back burner and it fits perfectly into another song we’re trying to finish. It’s funny how things will come back full circle.

TI: When I’m writing lyrics there really is no set method for how it happens, they’re my sort of metaphorical observations of any sort of situation I’ve been in or something that’s happened to me personally. I’m a big fan of a metaphor because A, It opens up my writing to a lot of intricate word play and B, I mean, anybody can just say something, but I try to say it in a way that racks people’s brains a little bit.

DL: To say something that means something…that’s kind of the point of the whole process.

TI: And to still have it be entertaining.

SMF: Based off of the fact that you’re willing to sleep on someone’s floor for the sake of touring, what are you looking to gain from touring other than basic exposure?

DL: There’s no getting around sleeping on floors unless you want to spend every dollar you make on a hotel room. Which, we’ve learned, is not the way to go.

KC: It sucks that your touring has to evolve around your budget so much, but it’s just kind of the way it goes.

DL: When you’re not on a label, and you’re doing it all yourself, it’s imperative to meet people that will let you stay with them. As uncomfortable as it may be, it’s still a roof over your head. We’ve had some delightful experiences, and we’ve had come not-so-delightful experiences.

TI: Again though, it gets better every time, you learn a little bit.

KC: You build better connections with people so you know that no matter what, or no matter when you show up, you’ll always have a place to crash. That’s just been an improvement since we first started out-of-town shows.

TI: If you truly believe in something, and you do it as best as you can, and you simply refuse to quit then eventually somebody, somewhere, is going to notice what you’re doing and extend a hand to you. Whether that be a record label, or a venue, or a crowd, or even someone just coming up to buy a t-shirt and poster. But that’s it, it’s a game, it’s like the industry is testing out how much shit you can take before you either just walk away-

DL: Walking away is just not an option. We’re all too passionate about what we do to let it inhibit our drive.

TI: I feel stupid doing something else besides this. 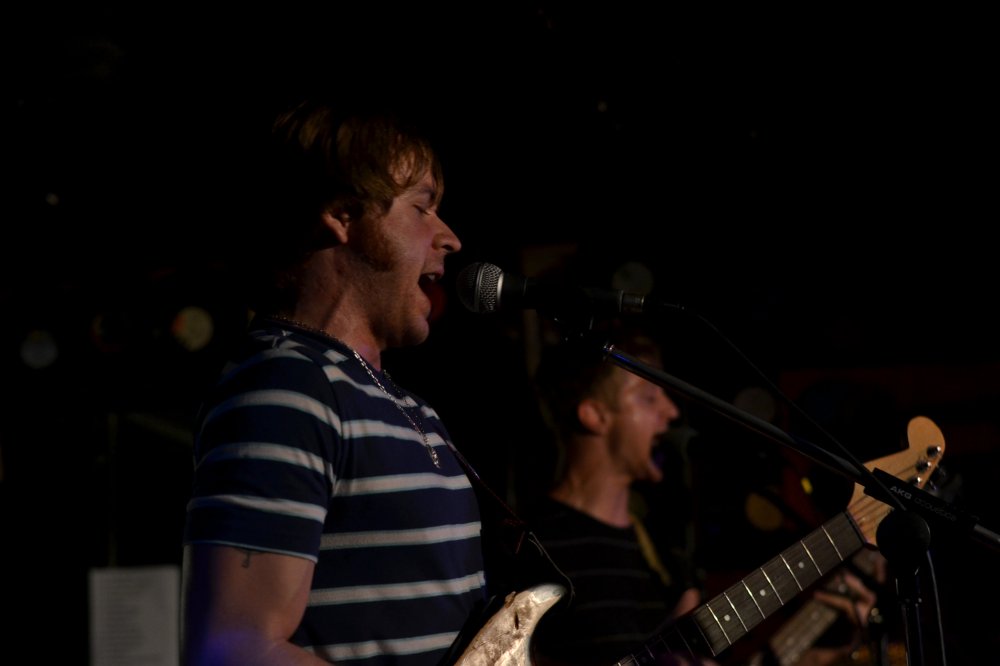